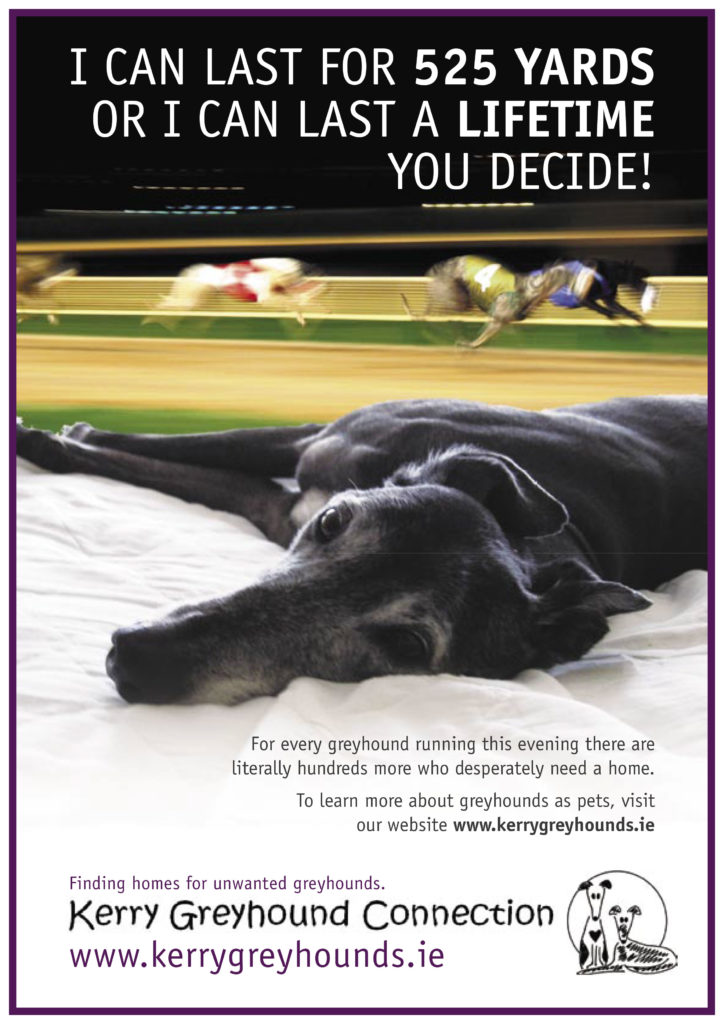 HUG first came into being in 2002 as Kerry Greyhound Homefinders. The organisation was founded by Amanda Saunders Perkins who came to live in Ireland in 1998 with her Irish greyhound, Dannydog. Amanda adopted Danny in England and all her friends and acquaintances were very impressed with her fine hound. Coming back to Ireland with him was, however, another story altogether. As soon as Amanda told people here that she didn’t race or course him she was besieged with questions as to what on earth was the point of having him then? As Danny got old she was also instructed to ‘throw him away and get a new one’.

Things came to a head in 2001 when a colleague told Amanda that she had been into the dog pound to get a dog for her daughter and seen ‘two lovely young greyhounds’ brought in to be destroyed. Amanda could ignore the situation no longer and used her own money to produce leaflets and business cards advertising a homing service for unwanted greyhounds. Hence, Kerry Greyhound Homefinders was born and the first two hounds, Connell and Emily, came into kennels in Beaufort. These spaces were paid for by the American European Greyhound Association.

Following a great article in the Kerryman with Connell and Emily featured in front of Killarney Cathedral with Amanda’s two children, Amanda was approached by the Irish Greyhound Board congratulating her on her project and offering financial help towards expenses. Since Amanda was working out of her own pocket apart from the kennelling fees she was pleased to accept this offer. The IGB today still contributes towards vaccination, microchipping and transport costs which, since all the greyhounds which come in are bred for the industry, we feel and clearly, so does the IGB, that it is fitting that the industry should contribute towards the cost of homing these hounds.

In 2005, Amanda’s sister, Jill, in Norfolk, England, began to help out with some of the administration of KGH to take some of the stress and workload off Amanda’s shoulders. At this time there was still only Amanda, her two children, and a stalwart volunteer, Tim – who probably deserves a medal as he has been on board since Day One and is still with us today – working here in Kerry for the hounds. Sarah in Wexford had also joined the hound-squad so a small but dedicated team was beginning to form. And we’re not mentioning any other excellent people or brilliant organisations with whom we work as we’re sure to leave someone out!

In 2006, Kerry Greyhound Homefinders became Kerry Greyhound Connection. The name symbolised the connections between the Irish parent organisation and its Norfolk branch which was formally established at that time and became a UK registered charity. The new name also represented the connections with the other people and countries within Europe with whom KGC was beginning to forge links. By this time KGC had hounds in the North of Ireland, UK, USA, Sweden, and Germany. This was done by establishing links with reliable pre-existing organisations that could do home assessments and provide back-up for hounds going to homes abroad – a process which has always worked well for us and by which we still home hounds abroad today. 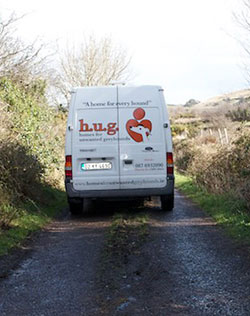 2011 was a momentous year for KGC in Ireland. We participated in the foundation of the Greyhound Rescue Association of Ireland with many other dog and greyhound rescue groups. Our application to the Irish Revenue Commissioners for a CHY number was successful.

Kerry Greyhound Connection had long evolved out of Kerry and had been taking in hounds from Wexford, Dublin and various other counties for some years. Yet it was, understandably, difficult to raise money at fundraisers for what had every appearance of being a Kerry organisation in far flung counties of Ireland.

With all these exciting developments, we decided to make a complete fresh start here in Ireland with a whole new name and image. After much discussion and deliberation, we decided on Homes for Unwanted Greyhounds as our new name. It does ‘exactly what it says on the tin’ and has the added bonus of the rather splendid acronym HUG – rather appropriate, we feel, as greyhounds are the huggiest of dogs but a lot of folks don’t know that yet! Hence it is our mission in life to get that information out there!!

So, here’s to HUG – our brand new organisation, forging ahead into the future for the hounds who need us. Onward and upward!!